Plant tissue sampling is a great tool in our agronomic tool box and has various impacts in both a preventative and a reactive decision-making process. Tissue sampling provides insight to potential deficiencies, diagnosing visual symptomology, and validating fertility programs. Our Verify® plant tissue sampling tool is an excellent way to not only help monitor nutrient demands and needs locally but also observe crop trends nationally.

Nationally, we are seeing a spike in nitrogen levels, with fields that are coming back low to deficient in nitrogen between the R2-R5 growth stage. This data represents a large geographic area spanning from Texas to Georgia to New York to Nebraska and most states in-between. These subtle hidden hungers showing up in the low range do not always manifest visual symptomology.

Nationally, 42% of the rice tissue samples between panicle formation and heading are showing low to deficient in nitrogen. The tillering through heading phase is crucial for determining crop health and ultimately yield.

Phosphorus trends across the nation showed 58% of corn samples were low between the VE-VT stages and 53% during R1-R5. Phosphorus uptake and demand in corn is relatively equal among vegetative and reproductive stages. Meaning if samples are coming in low early in that plant's life cycle, then we can assume that later in the reproductive phase, we are likely to see consistently low levels.

"Potassium is relatively immobile in the soil and can be affected by root size and depth, pH balance and soil moisture."

On average, 34% of corn samples were low in potassium between the R1-R5 stages. Potassium and nitrogen in corn generally follow similar uptake and demand trends; and 2/3 of that occurs early in the vegetative stages. Low potassium levels in the reproductive phase are concerning and will weaken the plant's ability to combat stress, such as drought and diseases as well as impeding sugar degradation and photosynthesis.

On average, 73% of cotton samples were deficient in potassium at early bloom and 33% of samples were low at mid-bloom. Once cotton begins to flower, there is a drastic change in nutrient demand and cotton becomes more sensitive to potassium deficiency than most other crops. During the bloom phase, cotton demand for potassium can be as high as 4lbs/day and the myriad of cotton diseases occurring are often associated with potassium deficiencies.

Overall, 25% of soybean tissue samples submitted during the R4 growth stage were deficient in potassium. In general, a 70 bushel soybean crop will remove 84lbs/acre of P2O5 (that’s 140 lbs/acre of 0-0-60). Potassium is relatively immobile in the soil and can be affected by root size and depth, pH balance and soil moisture. When soybeans have low potassium levels, their ability to assemble proteins from amino acids is reduced, creating a more attractive environment for pests and diseases. 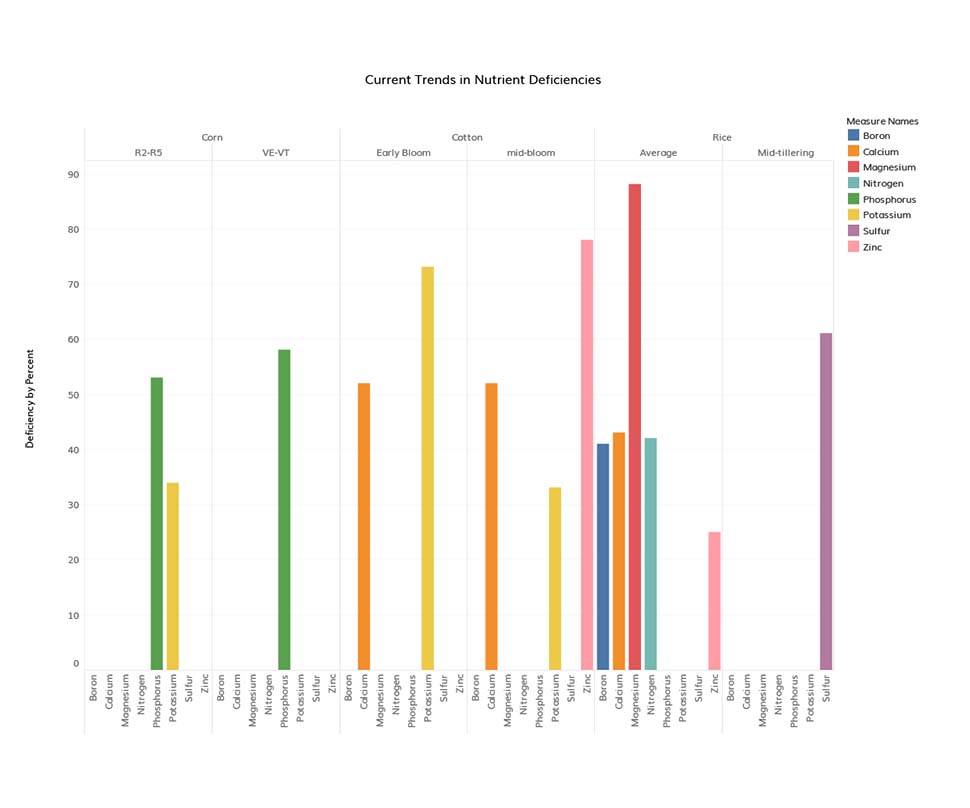 Overall, 69% of tissue samples were low in sulfur during various vegetative growth stages. With the reduction in available atmospheric sulfur and crop rotation practices (corn followed by soybeans), sulfur deficiencies are beginning to manifest across our sample geographic area. Previous crops such as corn and rice both inadvertently supply sulfur to soybeans through normal nitrogen applications made in the previous crop year. However, when the crop system consists of soybeans followed by soybeans, then sulfur deficiencies begin to be observed due to the lack of sulfur acquired through nitrogen applications; and corrective measures are needed to increase crop health.

On average, 61% of rice tissue samples during the mid-tillering growth stage were low in sulfur. Sulfur deficiencies in rice during the vegetative phase will impact plant color, height, maturity, and yield.

Overall, 78% of samples were low in zinc at mid-bloom and on average 52% of samples showed low calcium levels in early and mid-bloom. Zinc and calcium are important for new growth development in both the terminal and roots.

41% of rice tissue samples were low in boron at panicle initiation, 88% were low in magnesium at heading, 25% were low in zinc at heading, and 43% were low in calcium at all growth stages. In general, rice is low in micro-nutrients and will begin to be impacted during flowering through grain development.

As a Simplot Grower Solutions Tech Services Manager, Will Scott brings his industry expertise to the organization’s product offerings. Will works closely with research and development, proprietary brands and procurement teams to ensure we are delivering the best possible product to our customers.